Psoriasis [pronounced sore-EYE-ah-sis] is a non-contagious skin disease that affects as many as 7.5 million Americans. There are several different forms, each with distinct characteristics. Most people only have one kind at a time, although occasionally several different forms of psoriasis can co-exist in the same person at the same time. Also, psoriasis can also change from one form to another though more often it is the case that one type of psoriasis will clear and then another form of psoriasis will appear later. Psoriasis uncomfortable and can make patients self-conscious about the appearance of their skin. The good news is that there are many effective treatments available, in the form of medication or in-office treatment.

What are the Different Kinds of Psoriasis? 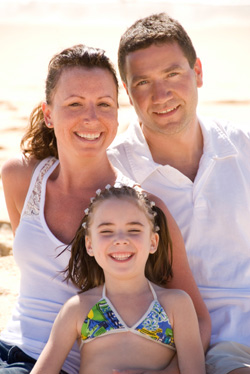 Plaque psoriasis is the most common form of psoriasis, affecting about 80% of those with the disease. It is characterized by raised, inflamed, red lesions covered by a silvery white scale. It is typically found on the elbows, knees, scalp and lower back.

Inverse psoriasis is found in the armpits, groin, under the breasts and in other skin folds around the genitals and the buttocks. Usually this type of psoriasis first shows up as bright red skin lesions that do not have the scaliness associated with plaque psoriasis. It may appear smooth and shiny. Because of its location in skin folds and tender areas, this form of psoriasis is exacerbated by irritation from rubbing and sweating. It is more common and troublesome in overweight people and people with deep skin folds.

Erythrodermic [eh-REETH-ro-der-mik] psoriasis is a particularly inflammatory form of psoriasis that often affects most of the body surface. (It may occur in association with another form of the psoriasis, called von Zumbusch pustular psoriasis.) This form of the disease is characterized by periodic, widespread, fiery redness of the skin. The erythema (reddening) and exfoliation (shedding) of the skin are often accompanied by severe itching and pain.

Erythrodermic psoriasis requires medical attention, as it causes protein and fluid loss that can lead to severe illness. Edema (swelling from fluid retention), especially around the ankles, may also develop. The body’s temperature regulation is often disrupted, producing shivering episodes. Infection, pneumonia and congestive heart failure brought on by erythrodermic psoriasis can be life threatening. People with severe cases of this condition often require hospitalization.

Topical treatments—medications applied to the skin—are usually the first line of defense in treating psoriasis. Researchers believe psoriasis occurs when faulty signals in the mmation (redness) associated with psoriasis.

There are many effective topical treatments. While many can be purchased over the counter (OTC), others are available by prescription only.

Corticosteroids, ordinarily called “steroids” by doctors and patients, are routinely used to treat psoriasis. Topical steroid medications can be very effective in controlling mild to moderate psoriasis lesions. They are easy to use and work relatively quickly. Most require a prescription. Topical steroids aren’t adequate on their own for moderate to severe psoriasis; however, they may complement other psoriasis treatment.

It is essential to use topical steroids properly to avoid unnecessary side effects. Many brands of steroid medications are on the market. They may look very similar, but they differ tremendously in their potency (strength of the medication) and in how they are to be used. Some steroids, for example, should be used only for short periods of time or applied only to certain areas of the skin. In addition, it is important not to abruptly discontinue steroids as this may cause the psoriasis to worsen. If you are considering using a topical steroid, it is important to know how to use it correctly. This will reduce the risk of side effects and help ensure a positive treatment outcome.

Phototherapy involves exposing the skin to wavelengths of ultraviolet light under specialized medical equipment, available at Long Ridge Dermatology. It’s also possible to follow a treatment regimen at home with a unit prescribed by your doctor. The key to success with phototherapy is consistency.